Monday Must Have...Somethin' for the body. Kombucha Tea 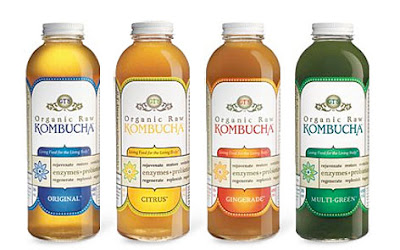 Without a doubt this stuff is addicting...to rejuvenate, restore , recharge and revitalize grab a bottle of GT's Organic Raw Kombucha. Kombucha tea goes as far back as 221 BC in the Chinese Tsin Dynasty and has been said to have near-magical healing powers. Although at first the taste takes some getting used to, once you try it a few times you won't be able to get enough of the stuff. Kombucha supports digestion, metabolism, immune system, appetite control, liver function, body alkalinity, anti-aging, cell integrity and healthy skin and hair. Do I need to say more...this stuff rocks.

* GT's raw organic Kombucha has been off the shelves for a few months due to labeling issues but hip, hop hurray it is back at Whole Foods and a bunch of other places. Lots of flavors available but try the gingerade.
Posted by Accidental Brilliance at 11:09 AM
Labels: Kombucha Tea, Monday Must Have