Bob Dylan...Tunes For A Tuesday 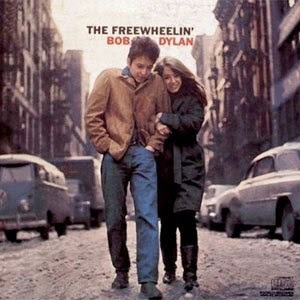 Ever wonder when you listen to a song who or what it might really be about...something about not knowing makes it easier somehow to infuse yourself or your own experiences into it. I read yesterday that the woman on Dylan's arm on the cover of his Freewheelin' album Susan Rotolo, who he called a muse at one time passed away. They only dated for a few years but when they separated he wrote two love songs which he has said were about her, "Tomorrow is a Long Time" and "Don't Think Twice, It's Alright". " Shelter From The Storm " remains one of my favorite songs of all time by Dylan and I sorta like the idea of not really knowing who or what it's about...


..." suddenly I turned around and she was standin' there, with bracelets on her wrists and flowers in her hair. She walked up to me so gracefully and took my crown of thorns, "come in" she said, " I'll give you shelter from the storm ".
Posted by Accidental Brilliance at 10:40 AM
Labels: Bob Dylan, Music, Shelter From The Storm, Susan Rotolo, Tunes for a Tuesday