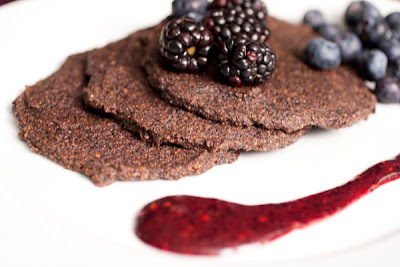 Chia seed is an ancient superfood that is a member of the sage family (Salvia Hispanica). The little black and white seeds were once a staple of the Incan, Mayan and Aztec cultures, along with the Native Americans of the southwest. Chia is actually the Mayan word for strength. The seeds were used by these ancient cultures as mega-energy food,  and give an incredibly 'sustaining' surge of energy. Chia is also great to boost strength, level out blood sugar and induce weight loss. Chia has been called a dieter's dream food because when added to foods, it bulks them up, displacing calories and fat without diluting the flavour. So it is like cutting the typical portion in half because you only end up consuming about half the calories you might have eaten, but because the food has been bulked up with chia you are still getting the nutrient-rich superfood. Chia also slows the impact of sugars on the system, if eaten together. Chia gel creates a physical barrier between carbohydrates and the digestive enzymes that break them down, which slows the conversion of carbs into sugar. That means the energy from the food is released steadily, resulting in more endurance. To make a basic chia gel, simply add 1/3 cup of seeds (2oz) to 2 cups of water. Stir the mixture well, to avoid clumping, then leave it in your fridge, in a sealed jar. This will yield around 17oz of chia gel. You can begin to eat the gel almost immediately if you like. Just 10 minutes is enough time for the gel to be formed. More of the nutrients will be easily accessible after a few hours however, so many people like to make up a batch like this and leave it in the fridge. It will stay good for about three weeks. Then you can just reach into the fridge and take out some of the ready-made gel whenever you need it. Add it to smoothies, mix it with salad dressings, puddings or granola, or simply take it by the spoonful. This is one superfood that is enjoying a big hype right now but delivers on it's promise. To try the delicious pancakes pictured above click on over here for a super simple recipe.